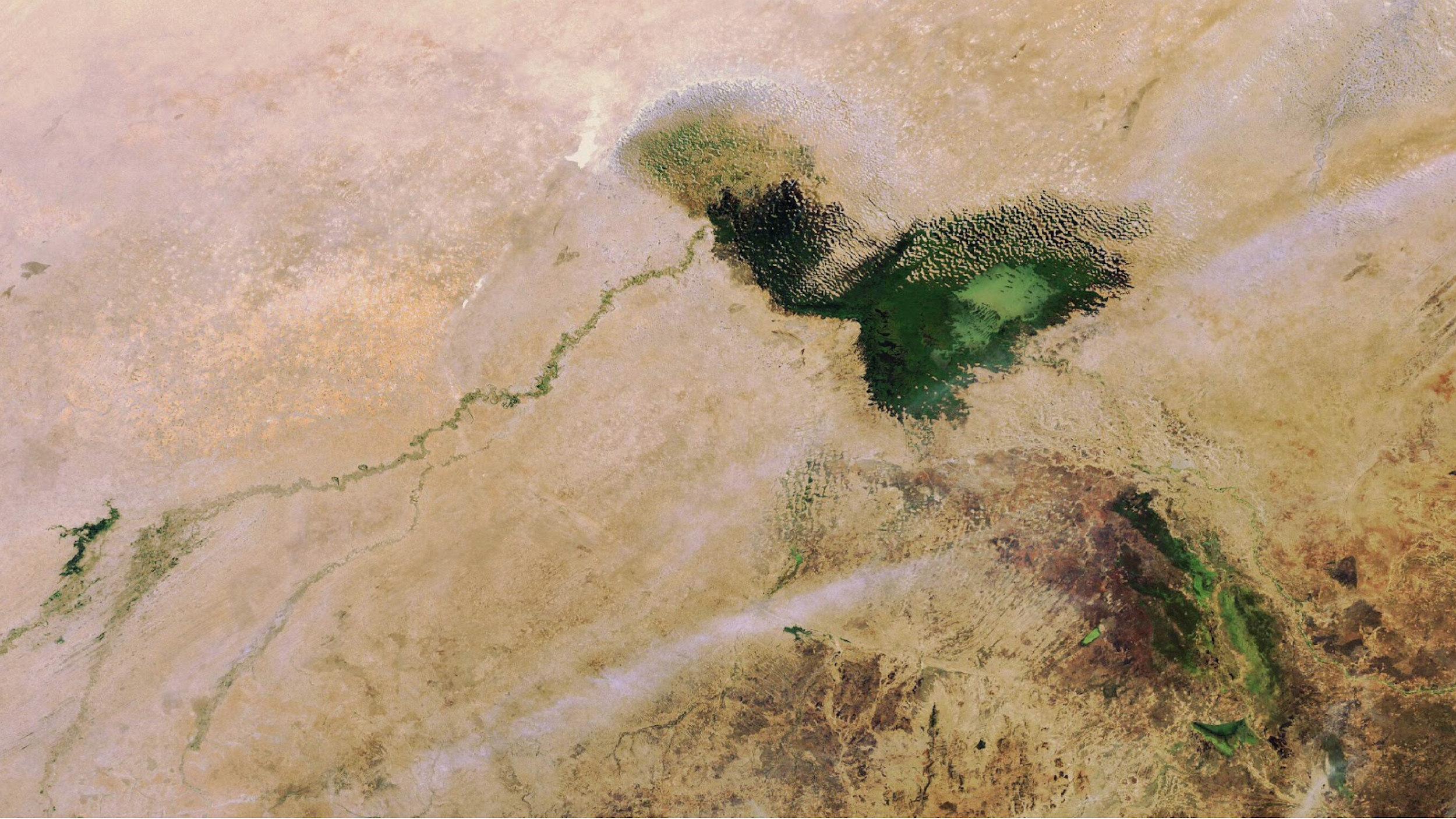 Lake Chad, a freshwater lake located in central Africa at the junction of Chad, Cameroon, Nigeria and Niger. The lake has shrunk dramatically over the last four decades due to a decrease in rainfall and an increase in the amount of water used for irrigation projects. Its surface area was 25 000 sq km in the early 1960s, compared with 1350 sq km in 2001. Image acquired 19 December 2007 by the MERIS (Medium Resolution Imaging Spectrometer) ESA Envisat satellite.

Lake Chad, a freshwater lake located in central Africa at the junction of Chad, Cameroon, Nigeria and Niger. The lake has shrunk dramatically over the last four decades due to a decrease in rainfall and an increase in the amount of water used for irrigation projects. Its surface area was 25 000 sq km in the early 1960s, compared with 1350 sq km in 2001. Image acquired 19 December 2007 by the MERIS (Medium Resolution Imaging Spectrometer) ESA Envisat satellite.

Lake Chad represents one of Africa’s historically largest natural deposits. It is vast and as such shares borders with Nigeria, Cameroon, Niger and Chad. But it is shrinking.

It sits within the Sahel, a semi arid strip of land dividing the Sahara desert from the humid savanna of equatorial Africa. The depleting Lake Chad is becoming an economic and security issue, and is driving one of the most serious security problems facing West Africa.

Lake Chad is economically important, providing water to more than 30 million people in four countries surrounding the central part of the Sahel. In West Africa, the multiplying effect on agricultural productivity, health and security of the region is affected by the decrease in water levels of the Lake. It has led to a decrease in the level of biodiversity and consequently has impacted fishing activities. This in turn, has led to struggle for survival and resources among its inhabitants.

These changes are increasing vulnerabilities and insecurities, impacting numerous conflicts happening around this region. The current climate crisis knows no boundaries. Natural resources connect countries together and this is why a crisis anywhere is a crisis everywhere. 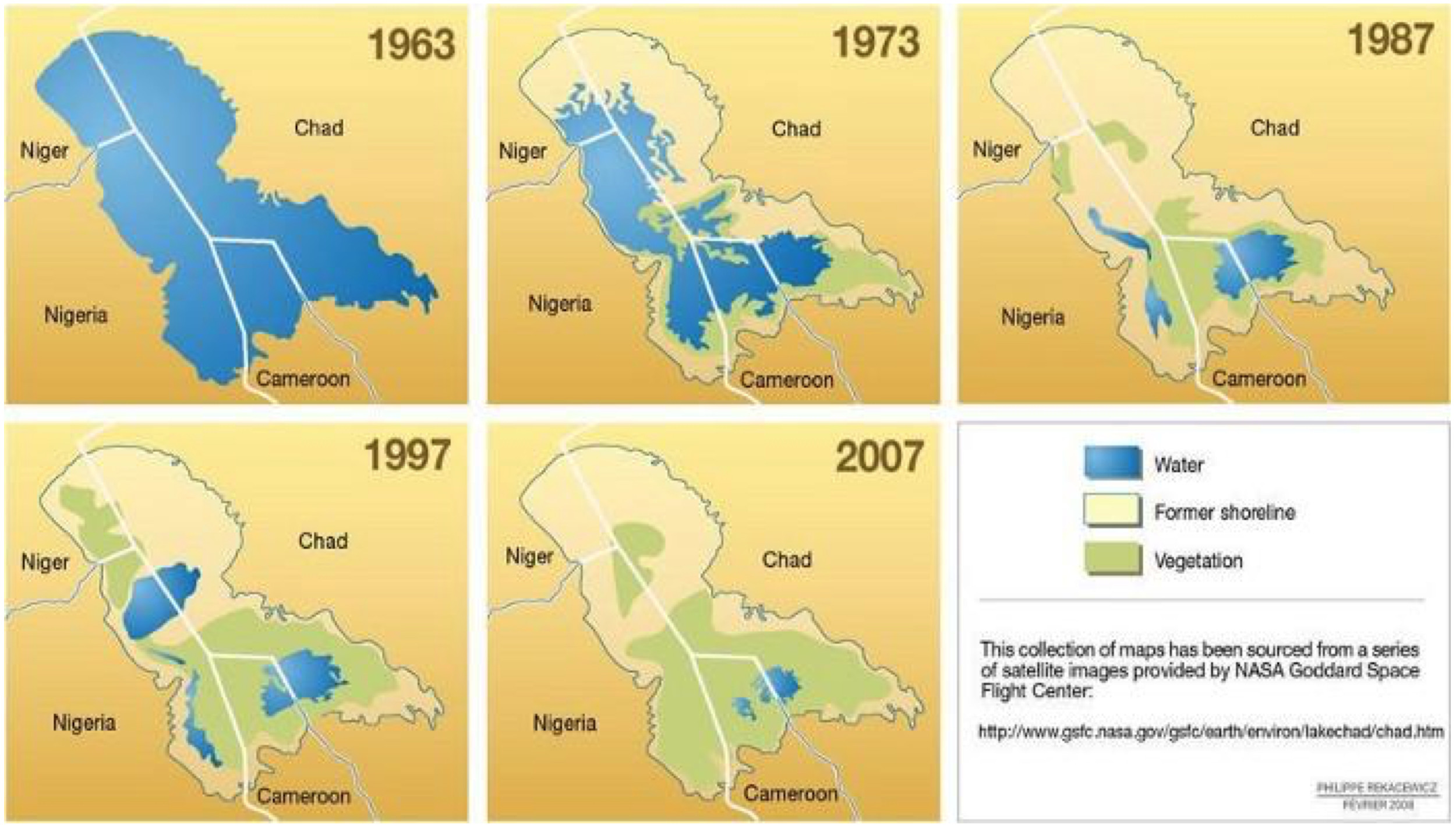 Furthermore, one of the direct consequences of climate change in West Africa is the depletion of natural resources. This has increased economic instability which is linked to a rise in armed insurrection and increased conflict which is due to imbalance of supply and demand of resources. Building a peaceful world begins with a fight against climate change.

How are Earth Observations being used to track changes in Lake Chad?

Did you know that the Sahara desert, the largest subtropical desert in the world known for its hot arid climate, was once a home for different species of plants and animals? In the past, there was once a “Mega Chad,” the biggest freshwater Lake on Earth covering 139,000 square miles of Central Africa but it's rapidly shrunk to a tiny fraction of its former size 1,000 years ago as found by some researchers. Royal Holloway Birkbeck and Kings College have used satellite images to map abandoned shoreline. This was revealed by studies that once showed that the Sahara was green and alive and a hypothesis suggesting that human activities were responsible for the transition of Sahara from lush green ecosystems to a barren desert. The impact of human activity and climate change has impacted the Sahara region before, and this is set to reoccur in the Lake Chad region again. 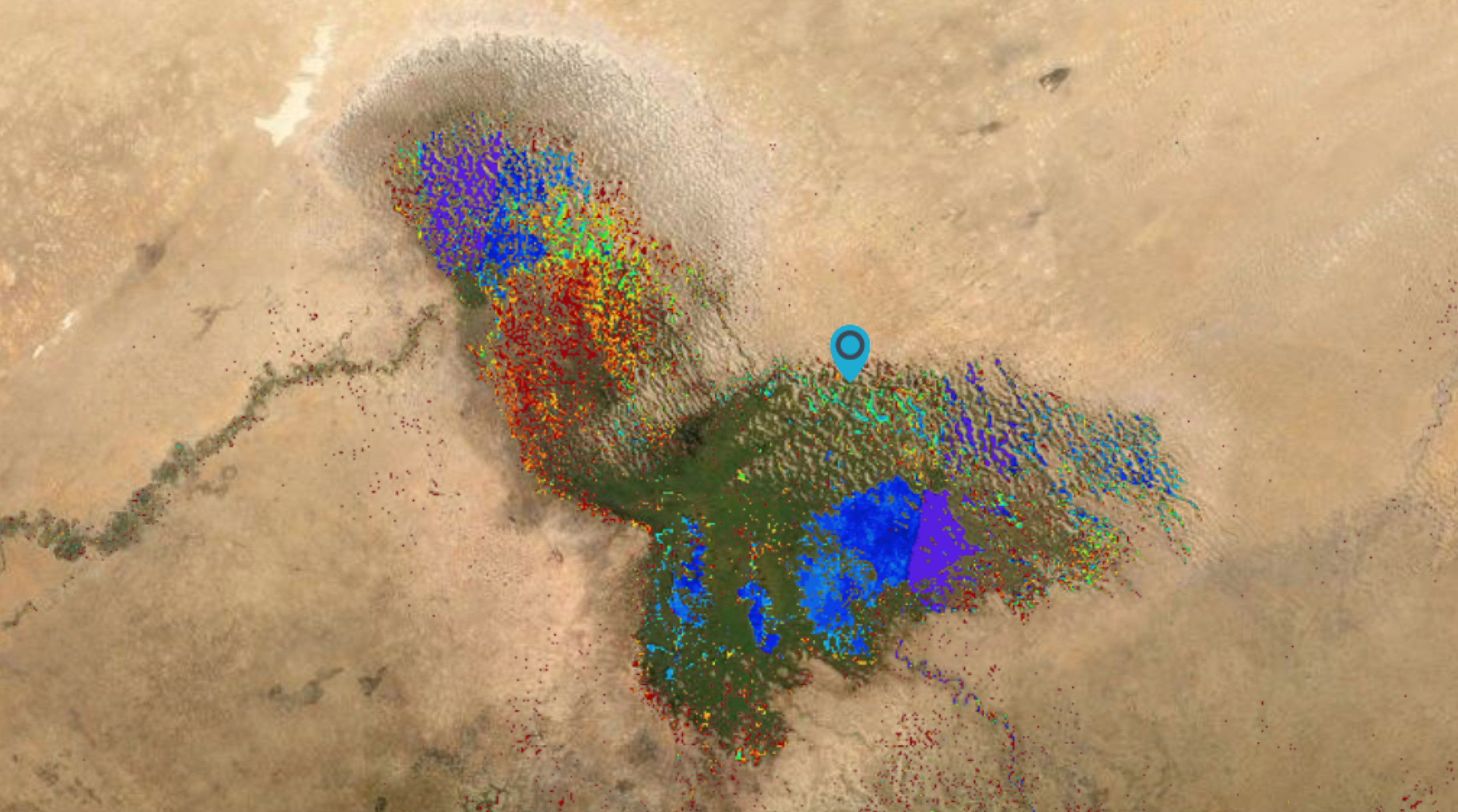 Summary presence of water in Lake Chad during the year 2013, showing in purple areas that have water most of the year and in red areas of the lake that had water only a few times in the year. (Image Credit: Digital Earth Africa)

Summary presence of water in Lake Chad during the year 2013, showing in purple areas that have water most of the year and in red areas of the lake that had water only a few times in the year. (Image Credit: Digital Earth Africa) 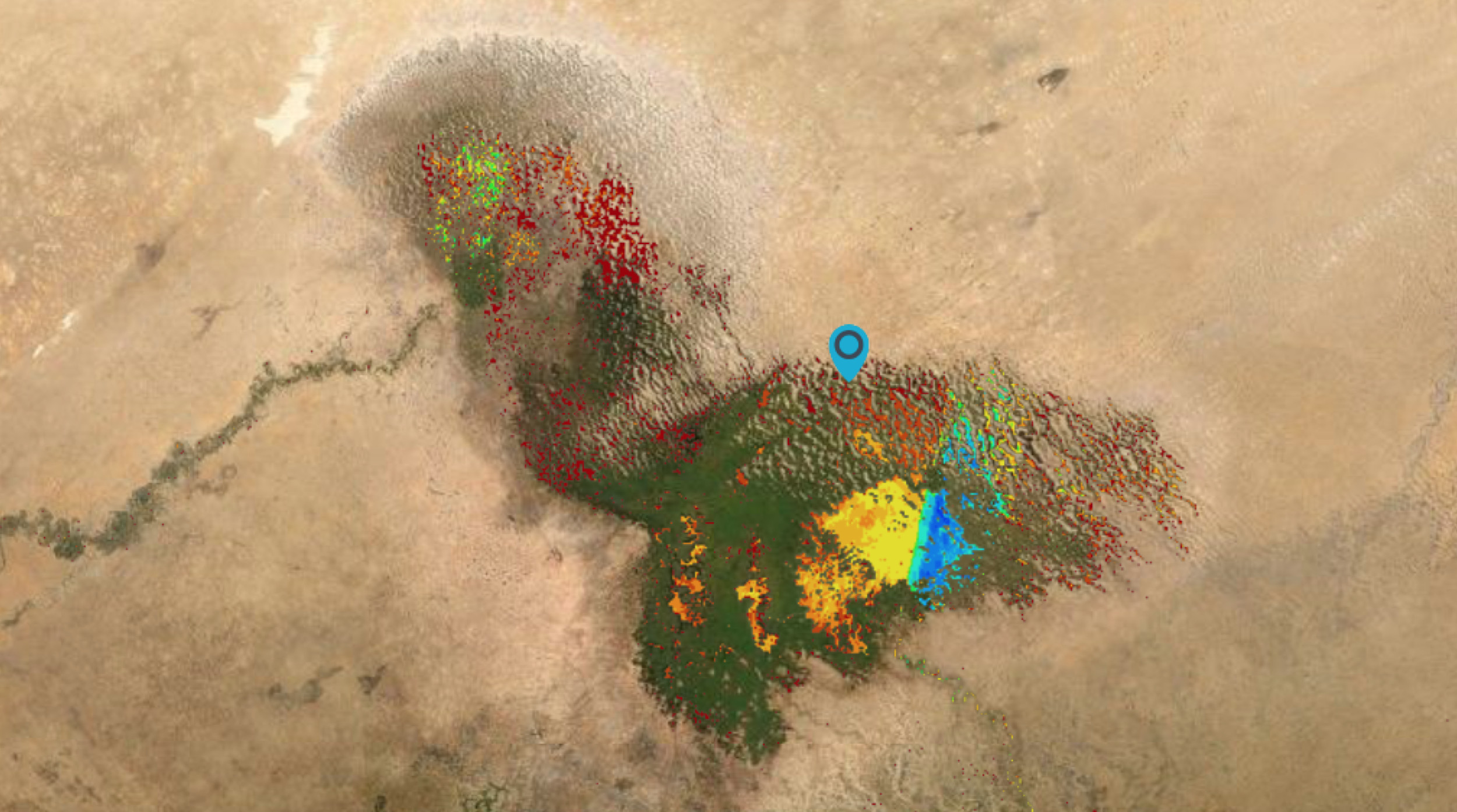 Earth observations (EO) show the seasonal fluctuations on the lake as well its shrinking volume over time. Note that it is expected for the water mass of a river to rise during the rainy season especially when it has one or more tributaries. It is considered shrinking when it does not serve the original purposes it does all year round or when it has lost its original size. 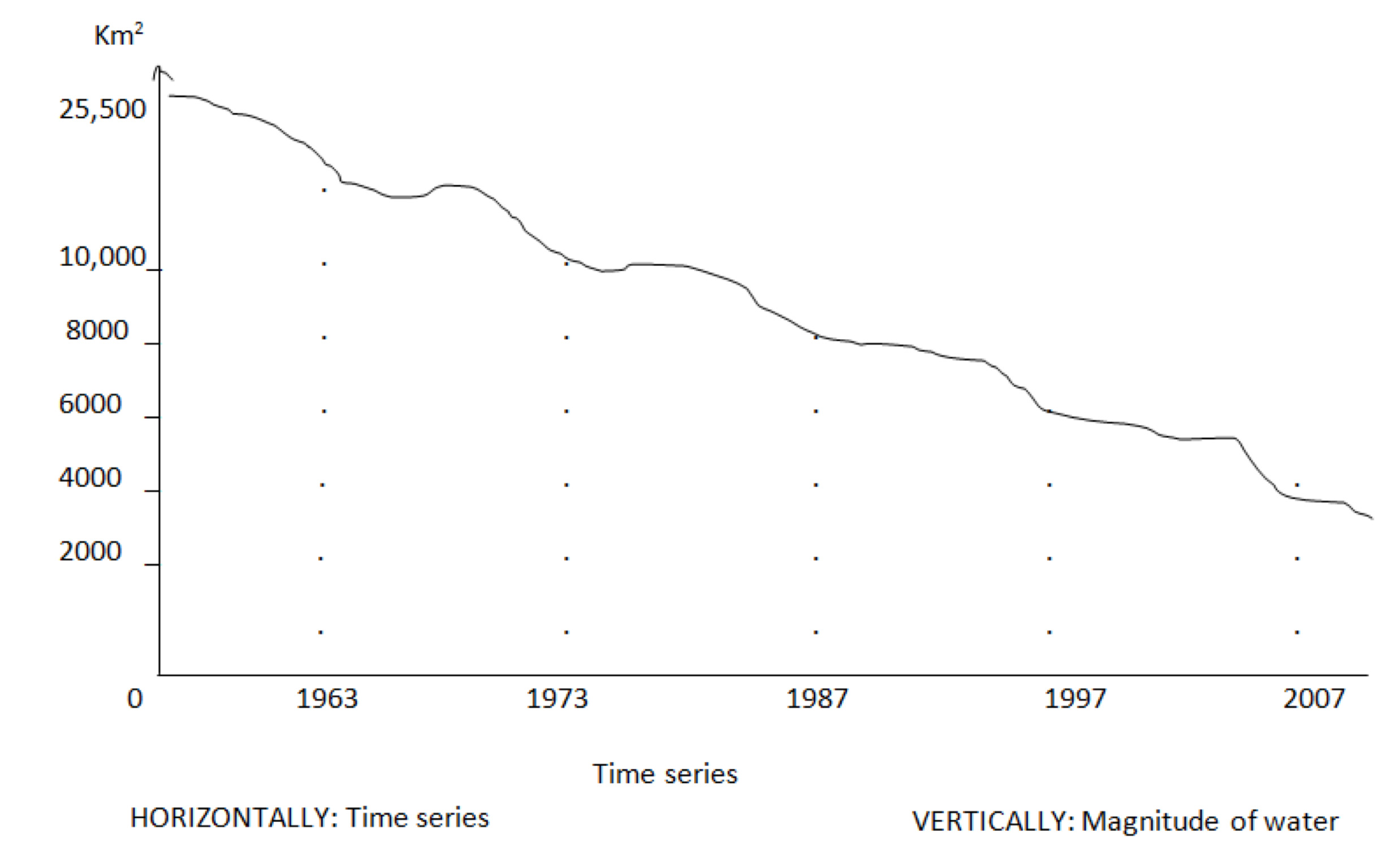 In the case of Lake Chad, it is a unique situation with a unique feature that aids its shrinking size. The carrying capacity of the lake cannot withstand the growing population total dependency and the surrounding areas of the lake have lost vegetation. Hence, we need the Great Green Initiative more than ever before - because we need nature as nature needs us.

The climate crisis in this region has affected agricultural production as it has declined radically. It's estimated that food insecurity impacts 2.4 million, and population displacement hit 10.7 million in accordance to the UN Security Council Report. These figures are set to increase especially in times of COVID-19 pandemic. This Lake Chad crisis represents one example of what the world will witness given the decades of inaction on climate change.

There is a need for verified data to be used to guide the right policy in taking steps needed. Data is important for people living in this region so that they have full knowledge of what, why, where and how they are victims of the climate change crisis: you can't solve a problem if you do not know it exists. Earth observations platforms, such as Digital Earth Africa, which holds over three decades of usable data, are crucial for monitoring climate change impacts, human behavior factors and most importantly monitor the impact of policy implementation on the critical land features.

This is the first step in the right direction to take in bridging the knowledge gap to get many people involved in solving the defining issues of our time. There has also been Multi-Nation Joint Action since it involves more than one country to harmonize actions, innovation, support and ideas because no country can solve a crisis alone. Furthermore, increased community involvement and meaningful collaboration with multi-stakeholders will help to restore Lake Chad and bring benefit to the lives of people who depend on it. 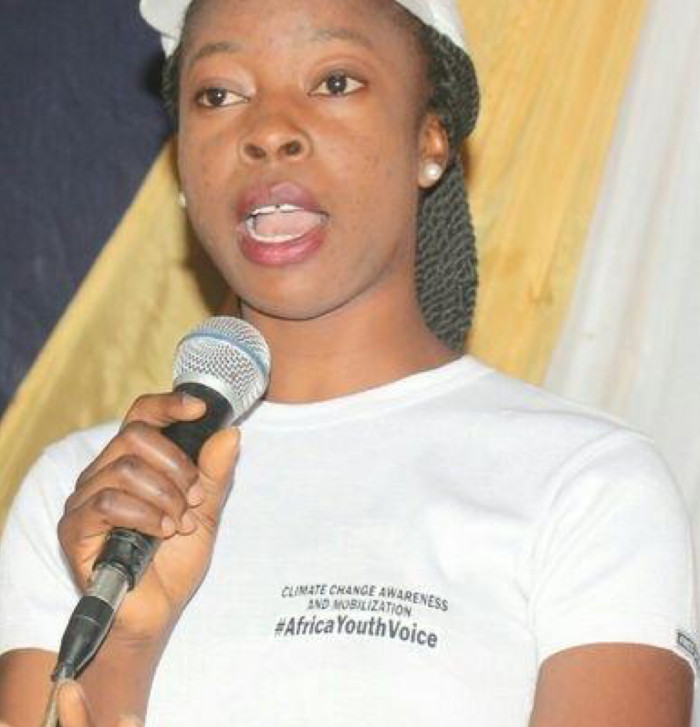 Oladosu Adenike Titilope is an eco-feminist & a climate justice activist. She’s passionate about youth involvement in climate action through climate education; and the importance of women’s rights which she links with environmental rights. Born in Nigeria, Adenike earned a first-class degree in Agricultural Economics & the Ambassador for African Youth Climate Hub, an initiative of the Mohammed VI Foundation for Environmental Protection. She also heads the "ILeadClimate" movement for peace, security and equality in Africa, particularly in the Lake Chad region: championing the Green Democracy initiative. An Awardee from Amnesty International Nigeria as an ambassador of conscience in recognition of the fight for climate justice. She tweets as @the_ecofeminist.