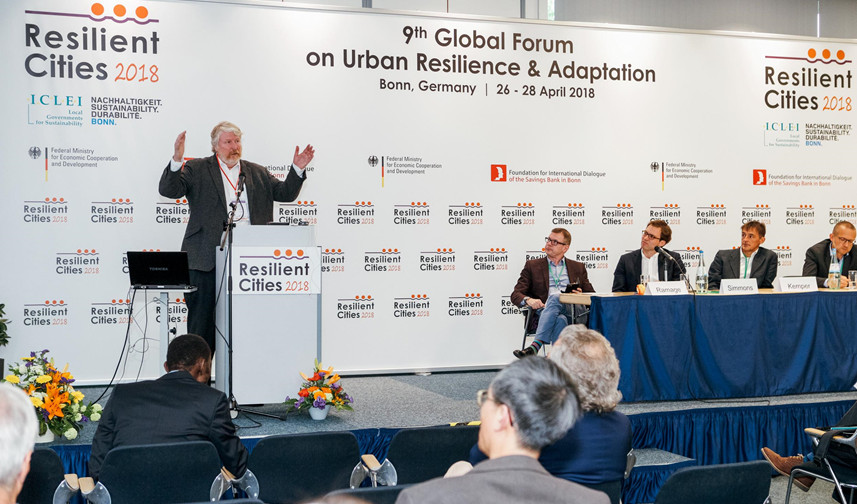 Each spring, a few hundred urban development practitioners, climate change experts and local government leaders from around the world gather in Bonn, Germany over three days for Resilient Cities ŌĆō ICLEIŌĆÖs Annual Global Forum on Urban Resilience and Adaptation. The first ever session dedicated to the topic of Earth observations was held on 26th April 2018, organized jointly by the Group on Earth Observations (GEO) and Resilience Brokers, the global delivery programme of the Ecological Sequestration Trust.

Andrew Simmons of Resilience Brokers introduced the session, speakers and expected outcomes. The session brought together a range of speakers who addressed how Earth observation data and other information play increasingly important roles in research, policy and decision making for cities, notably in areas of urban resilience and climate-change adaptation.

Steven Ramage of GEO moderated the discussion and opened the proceedings. Ramage explained the role and activities of the intergovernmental GEO partnership. Ramage highlighted the GEO engagement priorities relating to the Paris Agreement, the Sendai Framework and the UN Agenda 2030, pointing out that the New Urban Agenda is another area where GEO can link its activities at the national and global levels with city actions. GEO, through its initiative Earth Observations in Support of the Sustainable Development Goals (EO4SDG)┬Ā ŌĆō facilitates collaboration with numerous custodian agencies on several indicators. One area especially relevant to the urban resilience community is GEOŌĆÖs ongoing work with UN-Habitat on SDG 11: Safe and Resilient Cities (target 11.3.1). Ramage also highlighted the availability of open access datasets and open source platforms, coupled with some commercial data sources and information resources freely available in the GEOSS Platform. 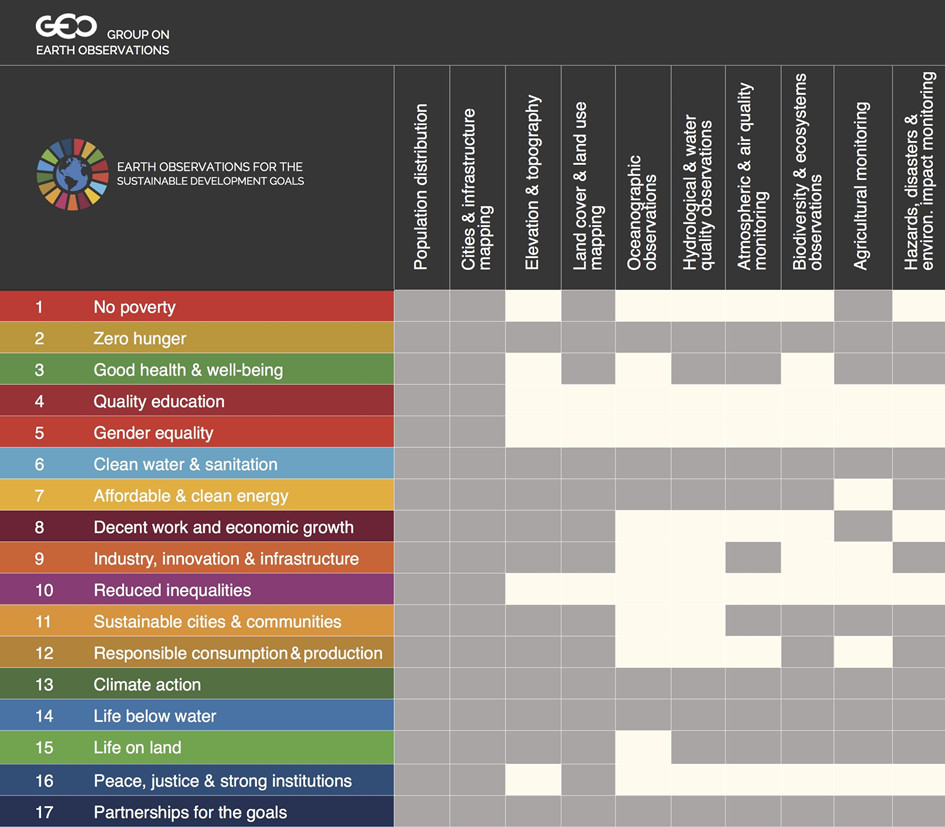 A joint presentation followed from Thomas Kemper of the European CommissionŌĆÖs Joint Research Centre (JRC) and Marc Paganini of the European Space Agency (ESA). Kemper and Paganini highlighted significant Earth observations investments being made in Europe via the Copernicus Programme and the Sentinel satellites, as well as particular initiatives they are working on. Kemper explained the JRC contribution to the GEO Human Planet Initiative and introduced the Global Human Settlement Layer (GHSL). Paganini spoke about ESAŌĆÖs extensive work on the SDGs, highlighted in a recently updated handbook from ESA and CEOS, as well as the EO4SD urban work programme and U-TEP.

David Stevens of UNISDR emphasized that Earth observation data is essential to measuring the achievement of the seven global targets of the Sendai Framework for Disaster Risk Reduction (SFDRR), along with the 38 indicators. Stevens introduced the open source, free of charge DesInventar Sendai database, developed by UNISDR for the reporting and systematic analysis of the 38 SFDRR indicators interlinked with other SDG monitoring systems.

The remaining presentations focused on practical applications of Earth observations at the project and programme level. Philip Briscoe from Rezatec introduced their ŌĆ£Re-naturalisation Index,ŌĆØ a predictive decision-support tool for flood mitigation. Briscoe explained RezatecŌĆÖs method in identifying green spaces with the capacity to mitigate flood events and then prioritise them according to their potential to receive and curb floods. He then walked through city-regional mappings of the technical criteria of an active project in France for a large municipality and how it will inform the city’s resilience programme and interventions.

Stephen Passmore from Resilience Brokers spoke to the importance of bringing EO and other sources of data together to support city-region resilience. He outlined the data-driven resilience.io integrated-systems platform for city-region planning, procurement and investment. Passmore went on to illustrate a use case in Scotland, which Resilience Brokers is conducting with Rezatec and ESA for Scottish Canals, on how EO data can give infrastructure and utility managers a greater understanding of risks, in this case of flooding and slope risks, in order to better plan and maintain their assets and networks. He concluded with the case for investing in EO data leading to greater infrastructure productivity, which through integrated planning can translate into a saving of up to 40% of the cost of the infrastructure needed to deliver the Sendai Framework and Global Goals.

Olanda Bata, from USAIDŌĆÖs Coastal Cities Adaptation Project (CCAP) in Mozambique, reiterated the importance of EO data for informing integrated vulnerability maps and local adaptations plans and municipal structure plans as well as specific interventions, which included restoration of coastal mangroves and other natural infrastructure. She explained how the use of climate risks including EO-generated data were successfully communicated to decision makers, impacted residents and other stakeholders in the five cities of her project through participatory planning processes and public forums.

Bata cautioned that without external support, however, access to data is somehow poor given the limited resources many municipal governments posses, especially in the Global South. Inadequate resources are a major constraint as the municipalities have many competing needs, some of them critical for service delivery. Therefore, acquisition of climate and geospatial EO data and the production of visualisations and analytical mappings are too often relegated as a non-critical priority category.┬Ā ŌĆ£Open-source platforms are a very good opportunity for attaining more data -- these resources must be made known and made accessible to various users,ŌĆØ Bata urged.

Launch of the joint report ŌĆ£GHG Monitoring from Space: A mapping of capabilities across public, private and hybrid satellite missionsŌĆØ