This May at GEOSS/HACK 2018, teams competed to develop data access and discovery tools that contributed to solving one of six real global challenges. 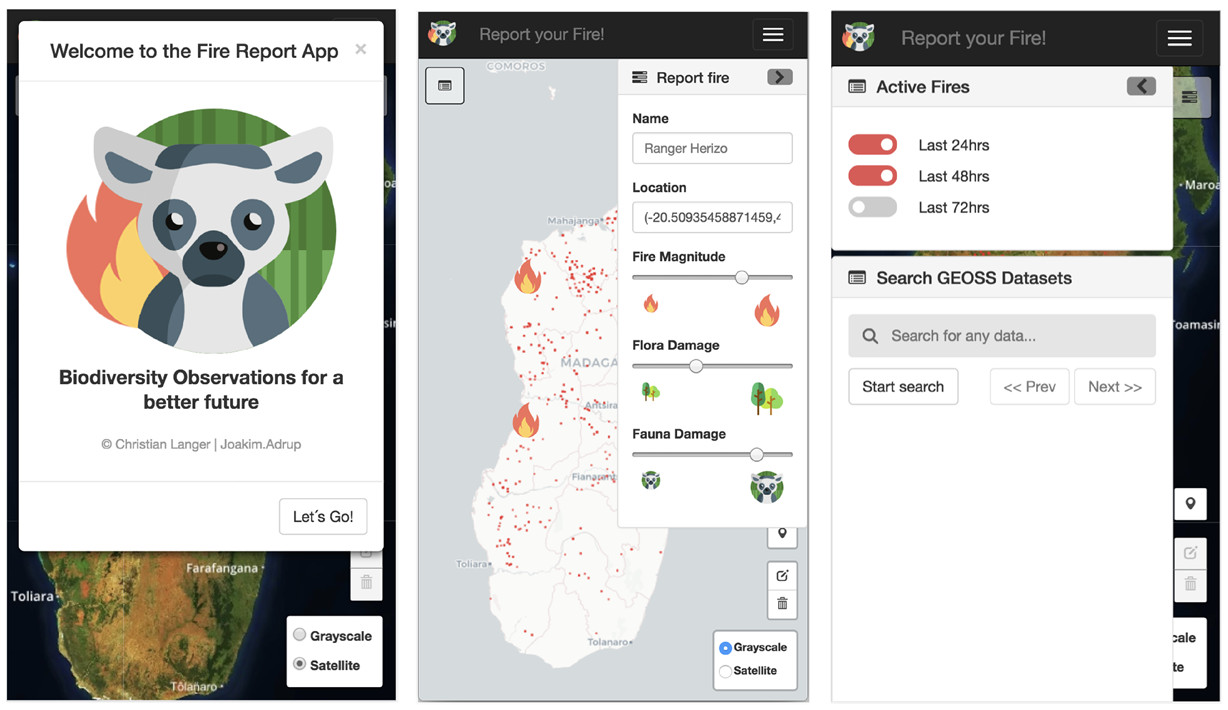 The winning entry, submitted by Joakim Adrup (ESA) and Christian Langer (GEO BON / iDiv), addressed the ‘Protecting our Forests’ challenge: to develop a biodiversity monitoring tool to motivate local patrols in Madagascar to engage with satellite images and contribute in-situ observations from the ground.

In response to this challenge, Adrup and Langer developed their entry Madagascar Fire as a web application that allows park rangers to easily report fire information, including assessments of fire magnitude, flora damage, and fauna damage.

We spoke with the winning team to find out more about this project and how it can be used to protect biodiversity and more:

Congratulations on winning GEOSS/HACK 2018! First, can you tell us a little about yourselves and your professional backgrounds? 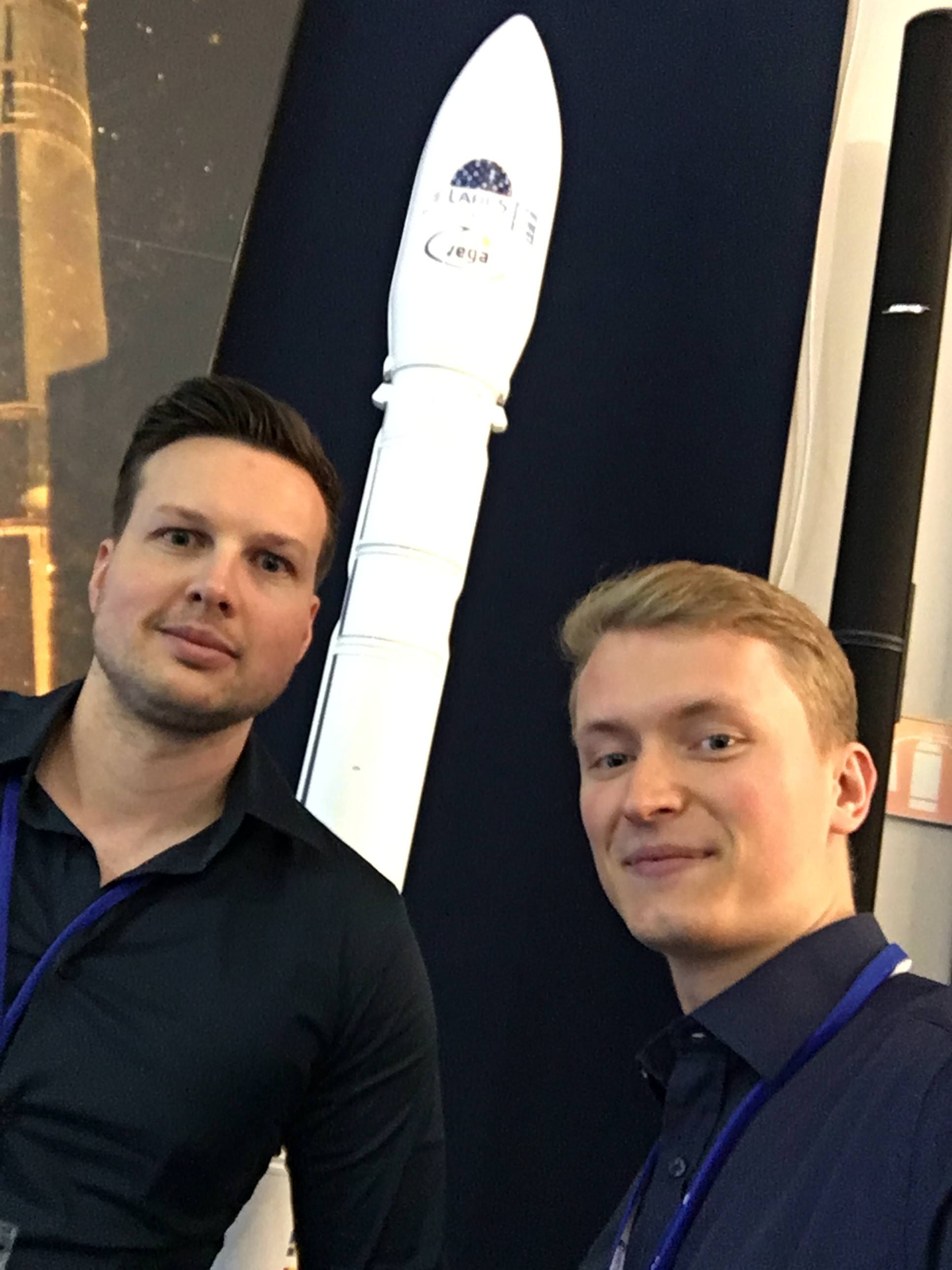 Adrup: Hi, my name is Joakim Adrup. I am currently doing a traineeship at ESRIN (ESA), working on combining data cubes with the GEOSS Platform. Meanwhile I write about my work in a master thesis for my home university. My previous background is with software engineering, specifically for medical imaging systems.

Langer: My name is Christian and I´m working as the IT Officer for the GEO Biodiversity Observation Network (GEO BON), which is hosted by iDiv, the German Centre for Biodiversity Research in Leipzig. Mainly I´m responsible for the entire technical infrastructure and the web and graphic design for GEO BON. I have a background in front- and back-end development.

Your team entry, Madagascar Fire, addressed the GEOSS/HACK ‘Protecting the Forest’ challenge. What made you select this particular challenge?

Langer: Well, my work at GEO BON, as the GEO Flagship for Biodiversity, and at iDiv are both mainly concerned with issues related to biodiversity. So it was close that this challenge was particularly near and dear to me.

Adrup: Both our expertise fit very well with the challenge. We both have worked with creating some user friendly and good looking websites before. The challenge had a very interesting usability requirement, designing an interface for an audience that doesn't read english is something I haven't tried before.

The primary objective of this challenge was for biodiversity protection and reducing deforestation, but I imagine there are many more potential benefits from real-time fire monitoring. In what other areas do you hope this tool might be useful?

Langer: That’s true! First of all, the app was intended to offer park rangers in Madagascar the opportunity to quickly and easily monitor new fires, report individual threats to the flora and fauna and making this information visible to everyone in the GEOSS portal.

But it is of course possible to complete the app with additional features, such as soil conditions or erosion. It would also be possible to create statistics in the front-end about current locations where fires often occur in Madagascar, which can certainly be helpful for other industries as well. Last but not least, it would also be useful to install a fire report to the responsible Fire Department, so that the tracked fires are automatically reported.

Adrup: As Christian said, using it to report fires to fire departments could be very interesting. It could be crowd sourced way of reporting disasters. I could definitely see it being extended to include other disasters like earth quakes, floods, etc.

Here’s a couple practical questions! First, would the app somehow ensure that only forest rangers were entering fire data in the app?

Adrup: Yes! Definitely, if rangers were to rely on the data only registered persons would be able to add data.

Langer: In the short time it was not possible for us to install a user login in the app, but it is planned that rangers register themselves and have their own user login, so that you can tell exactly who tracked what and when!

Second, assessing fire magnitude and flora/fauna damage on a slider might be quite subjective and inexact. Would you advise including some reference numbers or guidance for rangers on how to standardise these assessments?

Adrup: That is a difficult question that we would have to discuss with park rangers. To understand what information is necessary to them and also how to frame this data so it makes sense to them.

Langer: We were told that the majority of the rangers can not read and write, so we wanted to make the app as intuitive and easy as possible, which also allows non-english speakers to use the interface. That’s why input parameters are provided as sliders each with a value of 0 to 100 and a small and large icon, but you can certainly expand this with standardized numbers for sure, so it is even easier for the rangers. Suggestions are welcome!

This tool seems like it could be very useful in many fire-prone countries, such as Indonesia and Chile. Is there any reason the app wouldn’t work in other parts of the world?

Langer: No, the app could, of course, be expanded for use well beyond Madagascar! This would be awesome! All functionalities and the basemaps are open-source and you do not risk that it may be blocked somewhere.

Adrup: The only Madagascar-specific thing about the web app is the theme, with lemur monkeys. Which basically means no, no reason at all to not extend it other places.

The app allows anyone to monitor currently active and recent fires, as well as for forest rangers to report fire details. How is or would this be connected to the GEOSS platform and datasets?

Langer: On the one hand, rangers can add Web Mapping Services (WMS) harvested from the GEO DAB (currently 25.225.230 results) which could be useful for their report, e.g. some WMS about temperature, wind or other GEOSS data, such as locations about fire departments on the island etc. In the future, we could implement an opacity slider which would allow to change the transparency for these overlays.

On the other hand, after the fires have been recorded, with a click on the “send” button a connection to GEOSS will be created, which will forward the recorded location of the fire - including the name of the ranger and degree of flora/fauna damage directly to GEOSS and make it usable in the portal for everyone.

In the portal you could then search, for instance, for a ranger and their recorded fires will be visible on the map as a marker while the GEOSS sidebar lists its recorded data (as shown in the Youtube video). Pretty cool, right?

The full source code for the app is in the github repository, though you have noted it needs refinement before being used. Do you plan to continue developing the application? If so, what other features would you like to incorporate?

Langer: Yes that´s true, all code is on github and open-access! We hope we can refine the code collaboratively with Development Seed and with the GEOSS team in the near future. That would be fantastic! It would be great to get some feedback as well from the park rangers which function they want to implement additionally.

As already described, it might be useful to install an user login with a dashboard for the rangers so that you can tell exactly who tracked what and when!

The front end can possibly be completed with statistics, dynamic tables about fire and damage degree, search functionality etc., so residents of Madagascar could always use this web application to find out more about current and past fires on their island.

Adrup: It would be great to see if we can make this into something useful! Like Christian said, we would need to have a discussion with the rangers. Otherwise we will never really know what they would actually want to use.

We could add a publicly available part of the website, so that not only park rangers can use the website. A place where people can get news about the latest fire on the island.

Maddie West is the Communications Manager at the GEO Secretariat.