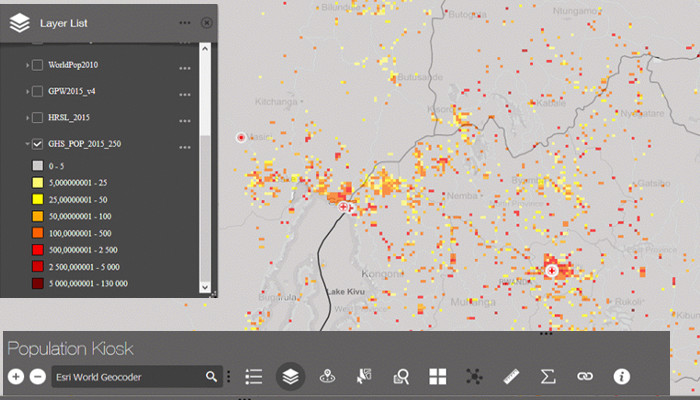 The International Committee of the Red Cross (ICRC) is working around the world to protect and assist the victims of the war and other emergency situations. In order to be effective, it is vital that the ICRC be able to  estimate the size of the populations affected by a conflict or disaster situation. By more accurately estimating how many people are being affected, the ICRC can improve response, and better plan activities such as food and supply distribution, or assess the distribution of medical service centres in a given area. Unfortunately, reliable information from statistical or government bodies is often missing or fragmented in the areas where the ICRC is working.

In response to this challenge, the ICRC’s GIS team is working to facilitate the accessibility of population information through a simple web tool called the Population Kiosk. The Population Kiosk gives ICRC team members access to  various population density grids and basic geoprocessing tools, allowing them to more accurately assess the size of the potentially-affected population.

The Population Kiosk uses 4 population grids: landscan 2011, WorldPop 2010, Ciesin 2015, and the Global Human Settlements Layer (GHSL).  Each grid has a different mix of coverage, methodology on for calculating population density and different spatial resolution. The estimated population will differ depending on the methodology used. As some layers are more appropriate than others in certain regions, the Population Kiosk gives access to multiple sources in order to allow the analyst to use the best option for a given context.

The GHSL in particular, released in 2016, is making an impact as “the most complete, consistent, global  free and open  dataset” on built-up areas and population. The GHSL produces global spatial information, evidence-based analytics and knowledge describing the human presence on the planet. This resource is supported by the Joint Research Centre (JRC) and the DG for Regional Development (DG REGIO) of the European Commission, together with the GEO Human Planet Initiative.

There are many barriers to finding and assessing reliable data on human populations at the speed needed for conflict and disaster response, but working with grids made available through open data portals such as the GEOSS Common Infrastructure (www.geoportal.org), the ICRC is able to better estimate population size in order to make live-saving decisions in their crisis management work. With more open data becoming available and new end-user applications being applied to global challenges every day, the opportunities for innovation in disaster risk reduction and crisis response are just beginning to be explored.

Yann Rebois is a GIS Specialist at the International Committee of the Red Cross since 2010. He was previously actively involved with CartONG and other humanitarian organizations including the UNHCR.