Canberra, Australia - A suite of new announcements and partnerships to enhance the economic and societal impact of Earth observations have been unveiled at the annual meeting of the Group on Earth Observations, GEO Week 2019.

Over 1500 representatives from 57 countries came together for a full schedule of events focused on collaboration to scale up the use of open Earth observation (EO) data to address the world’s greatest challenges. Delegates discussed better ways of working together to integrate measurements of our Earth into strategies and approaches related to climate change, sustainable development to disaster risk reduction. A new initiative, the GEO Week Industry Track, championed by the Australian Government, brought commercial sector representatives into the discussions throughout the week.

GEO Week Ministerial Summit endorses the Canberra Declaration - Hosted by the Hon. Matthew Canavan, Minister for Resources and Northern Australia, the GEO Week Ministerial Summit brought together more than 13 Ministers and Deputy Ministers and 15 Ambassadors from countries such as Ethiopia, Georgia, Iran, Tonga, Uganda and others to discuss the need to urgently apply Earth observations to our rapidly changing world. 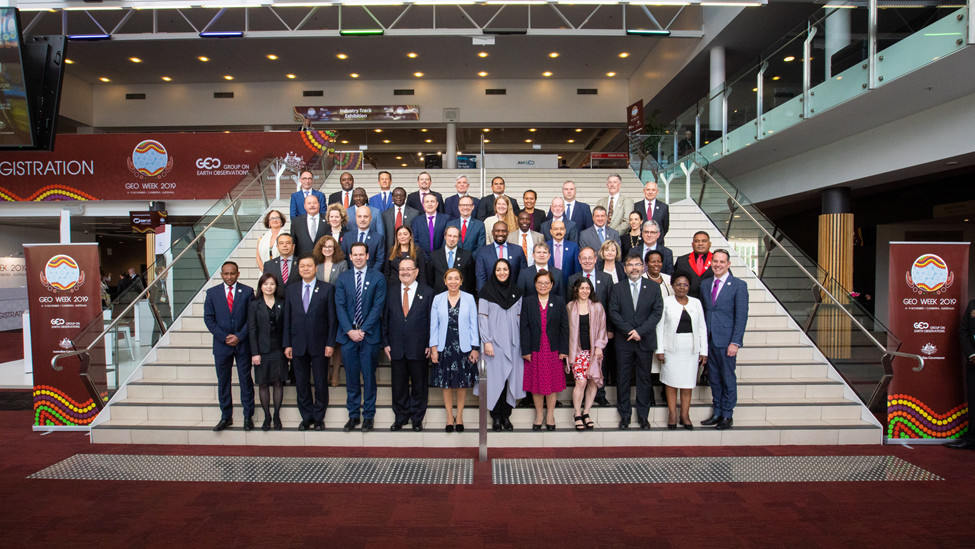 GEO Week 2019 hosted the first ever Industry Track - More than 50 representatives from companies, including Planet, Google, Amazon Web Services, Esri, Maxar and e-GEOS joined space and technology companies at one of the world’s largest gatherings of Earth observation practitioners and policy makers.

The Asia-Pacific Economic Cooperation (APEC) released a new report highlighting that Earth and marine observing technologies will be worth $2 trillion by 2030. Australia’s Minister for Industry, Science and Technology and Minister for Resources and Northern Australia issued a joint media release about the new report, highlighting the current and future economic value of EO to the Asia-Pacific region.

Earth observations to support Indigenous communities  - Throughout the week, dedicated events focused on inclusive dialogue with Indigenous communities. A global hackathon, (G)EOHack19 ran a series of regional consultations in various Indigenous communities around the world to identify challenges that can be addressed using open EO data. Teams across Alaska, Germany and Australia had 36 hours to develop a solution to these challenges. The winners, Team Triton from Australia, were announced at the GEO Week Plenary. They receive a 10-day mentoring session with IndigiLab, a 100% indigenous owned business that creates innovative projects through digital culture. Their project, Our Map, aims to preserve inter-generational cultural experience and knowledge.

Initiatives including the EO for Indigenous Communities Side Event brought global voices to GEO Week, particularly from the Americas, Australia and Africa. On the final day of GEO Week, Indigenous communities delivered a statement on behalf of the GEO Indigenous Alliance, which was formed at this event, to call for continued, effective, respectful, and reciprocal relationship with GEO. Read the full statement.

Earth Observations to support Pacific Island Nations - GEO Week 2019 marked a new chapter in GEO’s history by welcoming its first member from the Pacific Island region, Tonga. Through discussions under the Pacific Island Programme at GEO Week, Hon. Minister Vatau Hui from Tonga highlighted the crucial importance of the GEO community working together with the Pacific Island Countries and Territories (PICTs) and regional organizations to improve access and coordination of EO to support environmental, food security and disaster risk reduction, all areas increasingly impacted by climate change.

The Talanoa Session on EO in the Pacific was the cornerstone event under the programme. Talanoa is a traditional word used in Fiji and across the Pacific to reflect a process of inclusive, participatory and transparent dialogue. The Talanoa was led by the Secretariat of the Pacific Community (SPC) together with the Secretariat of the Pacific Regional Environment Programme (SPREP) and attended by many representatives from the region. Building on a number of recent and current initiatives, the Talanoa represent a significant step forward to achieving strategic, regional EO coordination. GEO looks forward to continued engagement with the region.

The Pacific Community (SPC) announced a new partnership to better understand the best way to harness EO technology for the Pacific region, working with partners in the region.  A detailed needs analysis was announced at GEO Week, which will be led by SPC’s Geoscience, Energy and Maritime Division alongside Pacific member countries, territories, partners, users and technical specialists.

Engaging the Pacific at GEO Week 19 builds on recent engagement activities including a two-day consultation workshop in Brisbane in 2018 that brought 75 delegates together, including representatives from 22 PICTs, as well as key Council of Regional Organizations in the Pacific (CROP) agencies. Read their newly launched report, An Earth Observation Platform to Support Pacific Island Nations.

China announces open data sharing from Gaofen satellites – At the opening of the GEO Week 2019 Plenary, China as the GEO 2020 Lead Co-Chair, made an announcement on open sharing of Gaofen data.

Japan announces data sharing from Radar satellies – The Japan Aerospace Exploration Agency (JAXA) announced that Japan will newly provide free and open access to the wide-swath observation data from the L-band Radar satellites, such as ALOS and ALOS-2, which are launched and operated by JAXA. Read the statement from Japan here.

GEO and Google launch a new programme for Earth observations development - The GEO-Google Earth Engine (GEE) Programme aims to support GEO Members and partners by helping operationalize their work, to help bridge the gap between science and applications, in order to produce tangible products that engage with end users and decision makers. Google will award up to 25 licenses for Google Earth Engine, accessible to any GEO Member or Participating Organization, with a value of US$ 3 million over the next two years.  Read the full announcement.

“Trusted data is crucial to advance the global use of Earth observation data,” said Gilberto Camara, GEO Secretariat Director. “GEO welcomes the initiative of ESIP to develop the Earth data Operational Readiness Level framework and their interest to launch it to the global audience at GEO Week 2019.”

Spotlight shines on the winners of the GEO Week Awards - At a special awards ceremony, the spotlight shone on outstanding individuals, organizations and countries that are making exceptional contributions to GEO and the global Earth observations community. During the GEO Week Gala Dinner hosted by the Government of Australia, prizes were offered in three separate categories, including: Citizen Science Awards by NASA and Scouts, the GEO Sustainable Development Goal (SDG) Awards led by the EO4SDG initiative, and the GEO Individual Excellence Awards. Meet the winners here.

GEO Week 2020 is heading to South Africa – Announced at the closing of GEO-XVI Plenary, GEO’s outgoing Lead Co-Chair, South Africa, announced that it will host next year’s GEO Week in Port Elizabeth, from 2-6 November 2020.