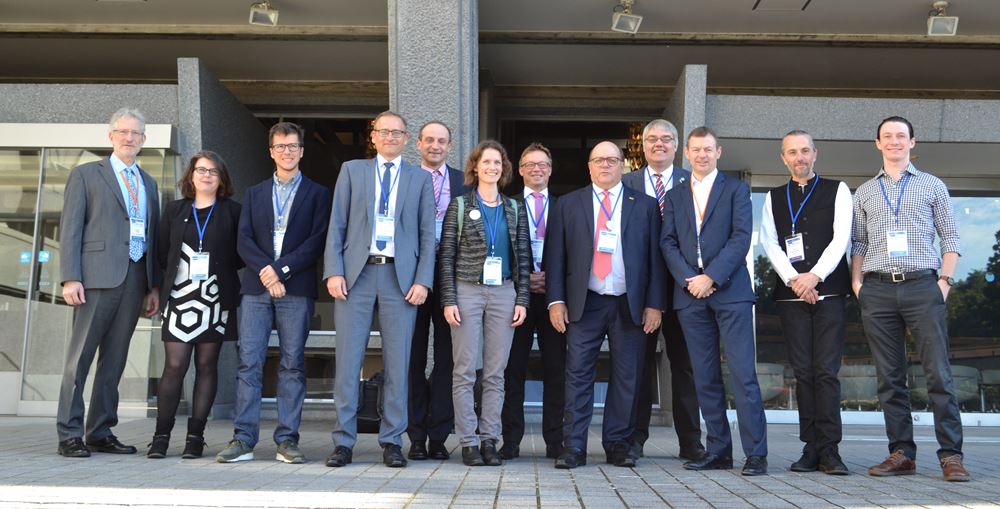 Members of the GEO LDN Initiative from the GEO Secretariat, UNCCD and Conservation International pose with representatives of the German delegation to the GEO-XV Plenary in Kyoto, Japan, following a pledge of support by the German Federal Ministry for Economic Cooperation and Development (BMZ).

Members of the GEO LDN Initiative from the GEO Secretariat, UNCCD and Conservation International pose with representatives of the German delegation to the GEO-XV Plenary in Kyoto, Japan, following a pledge of support by the German Federal Ministry for Economic Cooperation and Development (BMZ).

“The German Federal Ministry for Economic Cooperation and Development (BMZ) will support the GEO Land Degradation Neutrality Initiative with 100,000 Euros in 2019. With this we intend to make GEO-LDN more powerful with the objective to support Sustainable Land Management-relevant planning and decision making processes at the national and local levels,” said a representative of the German delegation to GEO Week 2018, “With the German contribution we wish to strengthen the participation of stakeholders from developing countries and to enhance the collaboration among competing Earth observations institutions to harmonize minimum data quality standards. We hope that this is a signal for other GEO Member Countries to also increase their contributions to the GEO LDN initiative.”

Land Degradation Neutrality is defined by the United Nations Convention to Combat Desertification (UNCCD) as when the amount and quality of land resources, necessary to support ecosystem functions and services and enhance food security, remains stable or increases within specified temporal and spatial scales and ecosystems.

Countries need quantitative assessments and maps of degraded land to halt, and eventually reverse, current trends toward land degradation. The importance of this Earth observation-based information is recognized in the United Nations Sustainable Development Goal indicator 15.3.1 (proportion of land that is degraded over total land area), and by the adoption of Land Degradation Neutrality targets under the auspices of the UNCCD.

“Land degradation is an existential crisis. Monitoring it was considered an insurmountable challenge. No longer. The emergence of Earth observation datasets – and more importantly the practical tools to use them – gives decision-makers immediate and actionable information to scale up sustainable land management and planning,” said Monique Barbut, Executive Secretary of the United Nations Convention to Combat Desertification.

In September 2017, the UNCCD 13th Conference of the Parties invited GEO to support them in implementing the Convention by providing space-based information and in situ measurements. In response, UNCCD and GEO partners have developed the GEO Land Degradation Neutrality Initiative (GEO LDN). This Initiative will advance the collaborative development, provision and use of Earth observation datasets, quality standards, and analytical tools to achieve Land Degradation Neutrality.

Welcoming the Initiative, Jennifer Morris, President of Conservation International said, “it is time to move from measurement and monitoring to action. From Conservation International’s experience in the field we know restoring nature is an important piece of building healthy lands that can support productive and sustainable landscapes. Earth observation, and tools like Trends.Earth, can support local and national governments in prioritizing and implementing restoration actions.”

According to Barron Joseph Orr, Lead Scientist, United Nations Convention to Combat Desertification, “a stakeholder driven process is key to ensuring national ownership. The ability to process, interpret and validate geospatial data still needs to be enhanced in many countries. Recent UNCCD capacity building workshops have clearly shown us the needs of data users. These will drive the work programme of the new GEO LDN Initiative.”

Germany’s pledge of support was welcomed by GEO Secretariat Director Gilberto Camara, who said “this investment will go a long way in getting GEO LDN off the ground to start helping countries monitor and address the drivers of land degradation. We greatly appreciate Germany’s continued support and significant contributions to the GEO Work Programme”